For a change, we started off early. It was 6:00 am and we were already on the road, moving towards the Key monastery. Key monastery is the biggest center of Buddhist learning in Spiti Valley. It houses close to 300 lamas for religious education. Key monastery has stood by many attacks by invaders and natural disaster through time. This resulted in frequent renovation which gave it its iconic defensive fort look. From a distance, the white painted monastery looks like a gigantic cloud floating in the air in the foreground of a brown-grey desert of the valley.

We reached Key just in time for the morning prayer. The loss of our sleep was rewarded by the chants and shlokas of about thirty monks in the main hall. The sole reason for my second visit was fulfilled and the feeling was way beyond serenity. I felt a calm inside me that I’d never felt before. We were later invited to the kitchen again where we had tea and salted sattu. Lama Anand gave us a tour of the monastery and we left for Kibber from there.

Situated at a little over 14,000 ft. Kibber is among the highest altitude villages in India. From a distance, it looked like a green rooftop garden of the valley. We had our breakfast in Kibber and started the long journey to Chandratal – the moon lake of India.

The roads were good initially but after Quta, about 20 km from Kaza, they changed drastically. The roads were all metal and we were riding on stones and dirt. With the roads, the landscape also changed to brown & dry, like a desert, with no sign of vegetation for miles. The sun was at its full glory and my nose was itching so bad that it was a task to keep my hands off it. We took a stop at Losar for lunch. Losar is also one of the check-points where they make entries of the people and vehicle passing the area.

We continued our journey to Chandratal. The roads were getting terrible with each passing mile. The bike was constantly shaking; and with it, us. It was like riding a huge vibrator. I thought at any minute the suspensions will fall out and there will be nothing left of the bike. We were hardly riding at a speed of 10kms/hr when I tried to change the song playing on my iPod. I reached out for the iPod which was in Ravi’s side pocket and in a split second, I and Ravi were lying on the road, watching the sky flat at 180 degrees.

I couldn’t even understand what happened and all Ravi had to say was – “Saale, gudgudi kyun kar raha tha?” (Fucker, why did you tickle me?)
Luckily, both of us were okay; not even a scratch. We laughed it off and settled ourselves on the bike again. The only change was that the iPod was in my pocket.

Pro-tip: Intentionally or not, never tickle the person who is in-charge of the machine you are riding.

About 2 hours after the ‘fall’, we reached Kunzum La. Kunzum La is a high mountain pass (15,000 ft.) on the eastern side of the Kunzum range of Himalayas. It greeted us with a thousand Buddhist prayer flags going wild with the wind. As if trying to break loose from their ropes and reach out to the wilderness of the higher Himalayas. The ‘Kunzum Mata’ temple was shining bright with its golden painted tops. All of this divine was matched with the grandeur of majestic Himalayan glaciers in the backdrop. 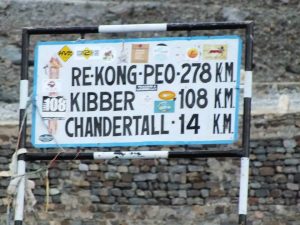 Kaushal and Aashima were already there when we reached. Soon, the others arrived as well. Looking at the road condition and the time in sun-down, we decided that instead of going to Chandratal, it will be better if we spend the night at Batal and go to Chandratal the morning after. One hour more on that fucked-up road and we were in Batal.

By The Spiti River

Batal is a tiny place. All I could see was two small dhabas, one government rest house, and a small hut. We got a cozy accommodation right along the roadside for just 100 bucks a night. It was a small plastic dome with mattresses for eight people. After dumping my bag in the dome I went out to explore the nearby area. I walked to the river-shore to watch the sunset. I sat on the rocks and plugged in my iPod. John Mayer was telling me how to deal with a heartbreak and I was reading Kahlil Gibran’s thoughts on different forms of love. My eyes were dancing between the book and the snow-capped Himalayas in the background. The river flow and the wind were so strong that it was difficult to hold on to a thought, except, just to admire the moment. In between all the floating thoughts, it was a perfect harmony.

Amit and Tina came looking for me and we watched the sunset together. I finally got time to talk to my Baba Himalaya; with the loving company of Tina. I told them that I was having second thoughts on going to Manali the next day. I wanted to spend one more night in Batal, doing nothing.
“Himalayas are infectious. If you let them, they will keep you with them forever.” said Amit with a smile.

It was the first (and only) time on the trip that all eight of us were in the same room. The night was spent in sharing stories. And God! We all had many.

Click here to read about how I found the most pristine lake in Spiti Valley!!!

Uncovering The Middle Land (Day 1: Fighting all odds and going on a solo trip)
The Day When Roads Scared the Shit Out of Me (Day 2: Riding the treacherous roads of Kinnaur)
The Day of Strangers Becoming Friends (Day 3: Got stuck in a landslide)
The Day of Body-ache & Sunburns (Day 4: Bike ride to Kaza)
The Day of Changed Plans (Day 5: Visiting the beautiful Key Monastery)
The Day of Dream Destination Chandratal (Day 7: Visiting one of the most pristine lakes of India)