It was the morning of 6th July which was coincidentally the birthday of His Holiness, the Dalai Lama. As most of the people flocked to the Diskit monastery where he would be delivering teachings, I found that I had the monastery at Thikse all to myself. 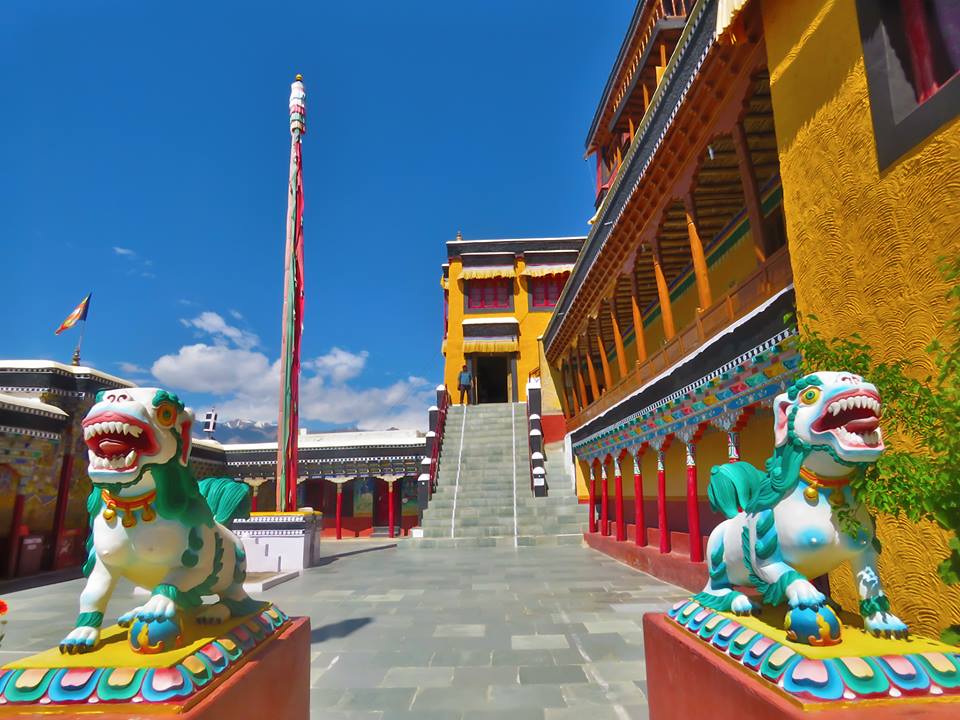 The courtyard of Thikse Monastery

It was still early in the day when the sunlight was streaming in through a large window, overlooking a picturesque valley, only to further illuminate an already resplendent golden statue of Maitreya Buddha. The professed successor of Buddha currently seemed to be at peace with the view presented to him on, seemingly unperturbed by the prophecies of the future. 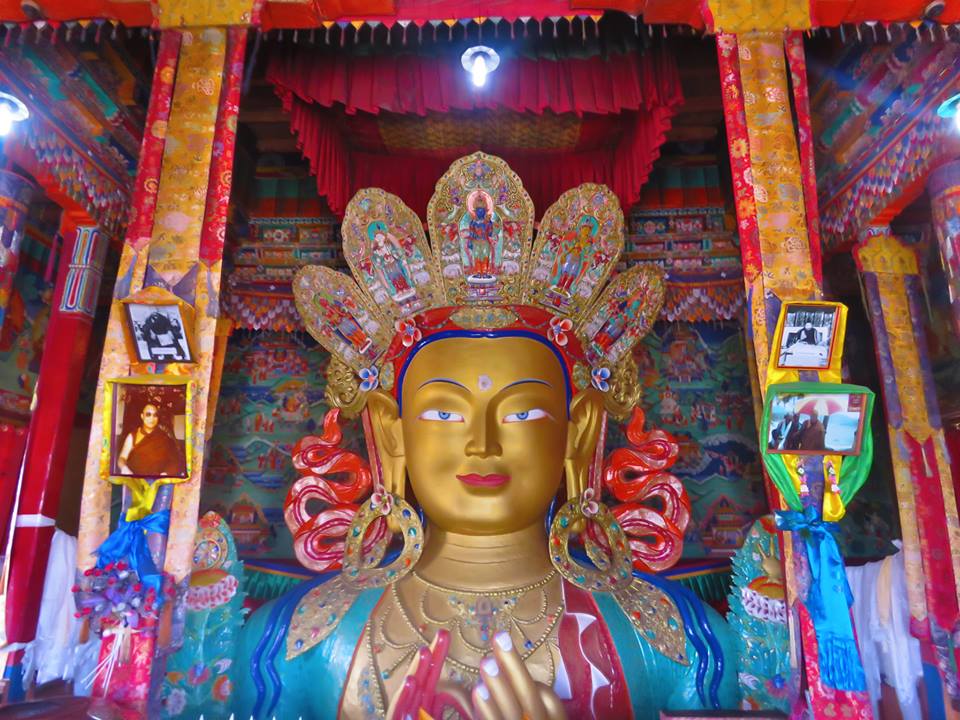 The golden statue of Maitreya Buddha in Thikse Monastery

As I walked through the central courtyard, adorned by vibrant hued murals, I clicked a few pictures before heading back to the road to the most awaited destination of my entire trip Pangong Tso. Pangong Tso which literally translates into an enchanted lake had been on my bucket list ever since I had heard about it and now as I embarked on a journey towards it, I felt like things were finally coming full circle. It was a long and winding road to Pangong but it was one which had its own story to tell. Undulating mountains with meandering roads gave way to high altitude plains between them which were interrupted by the occasional fresh water stream forging its way. This resulted in a perfect symphony of browns, blues, and greens. After a few hours on the road, I finally arrived at Chang La pass, the third highest pass in the world. The temperature has suddenly dropped here, I rushed inside to the Cafe. The Chang La Cafe could have given the United Nations a run for its money when it came to the diversity of the people hanging out there. Bikers from South India, a couple from Bengal, tourists from Malaysia, backpackers from Argentina gathered at this quaint spot for conversation over Maggi, momos, and chai. After stories were exchanged and spirits rekindled, I stepped out from the cafe to notice a pack of dogs being fed by people. The strays of Leh were furrier and healthier compared to their malnourished counterparts from Mumbai and had decidedly agreed to not letting tourists have all the fun when it came to eating momos. 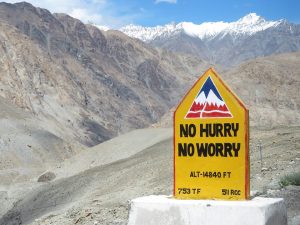 With their wagging tales and disarrayed barks, they bid their adieu as I journeyed towards the beckoning blue waters. After Chang La, the roads had a mind of their own, they were unrelentingly bumpy, narrow and weathered down with sharp turns. The vehicle I was travelling in reverberated as if it was caught in an earthquake that measured 8 on the Richter scale, nevertheless, it trudged on slowly but steadily toward the destination. When the roads got too exhausting, the sarcastic and witty road signs brought a breath of fresh air and lightened the mood. 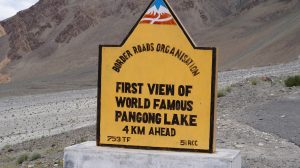 Ranging from “Darling not so fast” to “Drive like hell and you’ll be there” these signs spelled safety with sass. I was constantly on the look out for the yellow milestones as a way to pass the time and before I knew it, I saw the board that said the first view of Pangong was coming up ahead. Soon enough, there it was a mirage of grey and blue floating around a gradient of brown mountains. 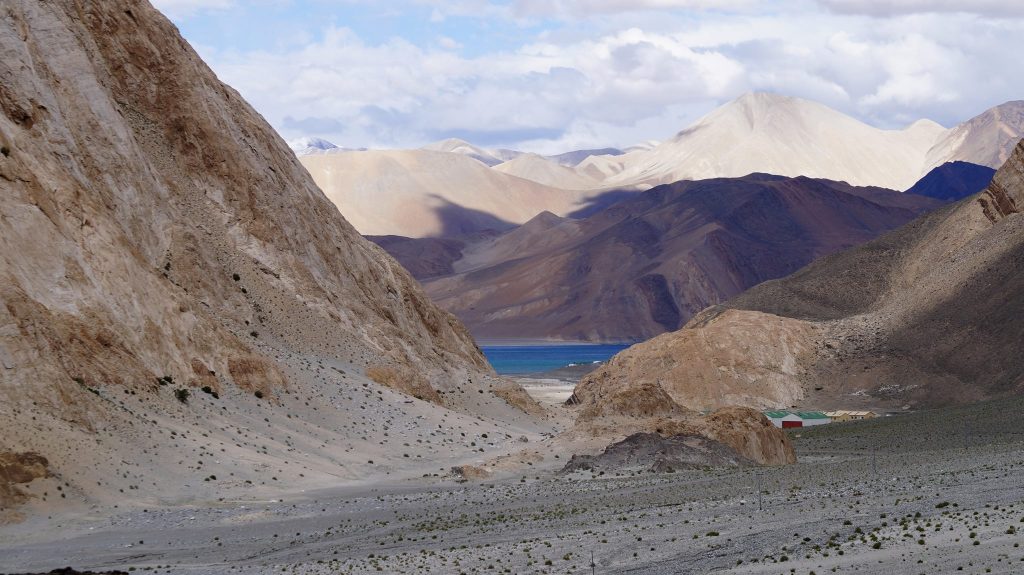 As the road curved and we got closer, I noticed the lake was much bigger than I could ever anticipate. It went on for over a hundred kilometers and this was just the fraction of it that was in India. Despite being awestruck by its sheer magnitude, the initial stretches of the lake were not as blue as I’d pictured. After a cumbersome journey that had gone on for over 6 hours, I was a tad bit disappointed. Luckily for me, the disappointment was fleeting, as we drove along I noticed how the Pangong loved to play with colors. It truly was enchanted. The light interspersing through the passing clouds and the shadows cast by the surrounding mountains caused greys that turned to blues that got deeper and bluish greens that emerged as if they were painted by Picasso himself. 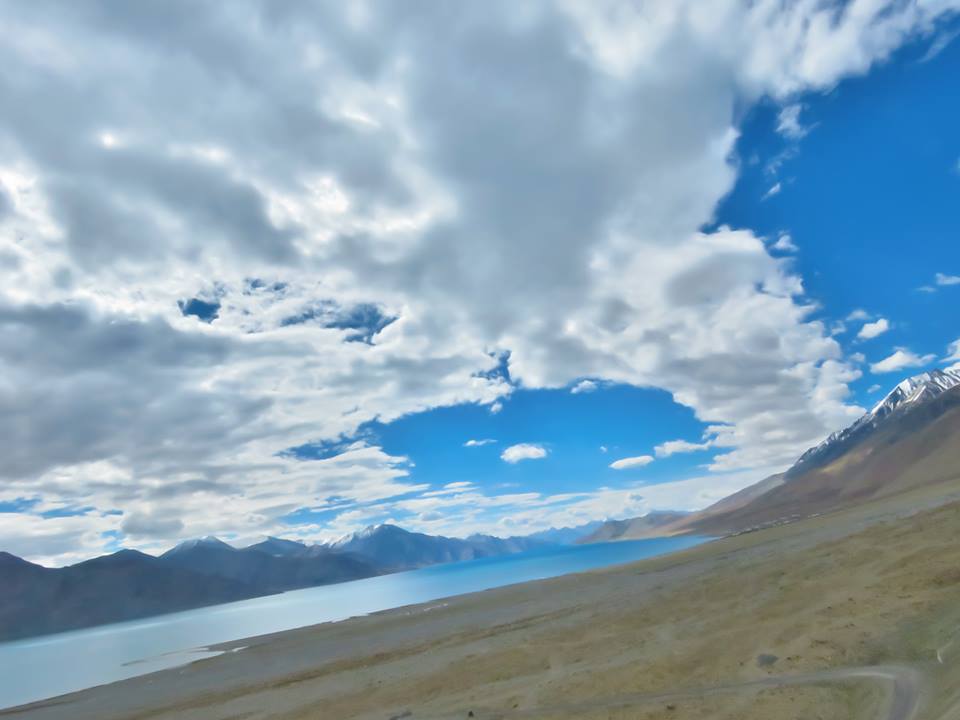 Our vehicle finally stopped at a clearing in the mountains that looked like a circular chest destined to hold an amethyst lake and I started walking towards the shore. It was a long walk towards the edge of the lake, which had initially seemed much closer, but I didn’t mind as it gave me the time to take in all the sights. As soon as I had reached, I plopped myself down on the sand (yes sand it is a cold desert after all) overwhelmed. The juxtaposition of the snow covered mountains and the sand, the lake covered with green grass patches around its edges in the middle of a desert was enough to baffle anyone. I couldn’t believe that I had finally made it to one of the most beautiful places I had ever seen. There was a gazebo propped against the backdrop of those picturesque mountains which was decorated with characteristic Tibetan prayer flags. In colors of red, blue, yellow, green and white, these flags represented the five elements of nature – fire, sky, earth, water and the sky. The tranquil atmosphere was justified by the faded flags fluttering as if they were dispersing their prayers into the wind. 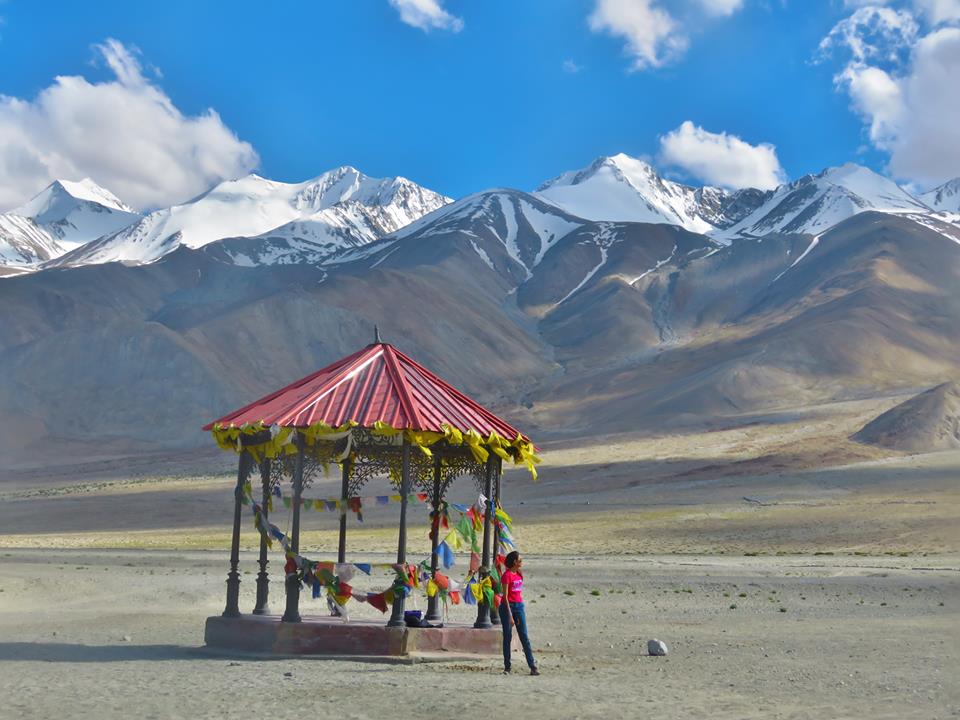 However, the serenity was interrupted in parts by commercialization that had crept in due to a large number of vendors and horses available to ride for a bargain. 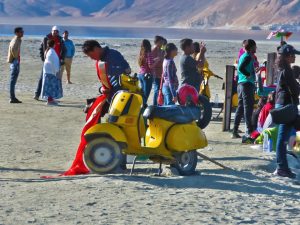 The opportunist locals had used the publicity that they received because of the Bollywood movie ‘3 Idiots’ to start quite a profitable venture. The iconic yellow scooter and red lehenga worn by Kareena Kapoor in the climax of the movie were available as props for eager tourists to click pictures. Despite all this, there was still something pristine about the lake, it was a living breathing entity that had established its place over thousands of years. I felt the calm vibe exuded by those blue waters too and it reflected in the children happily riding the horses, the people roaming the banks just listening to their music in peace and even the vendors conducting their business there. I waded into the lake, and splashed my face with its rejuvenating waters with seemed to erase all the exhaustion of the journey. After a few hours which passed in the blink of an eye, I made my way to the camp where I’d be staying the night. 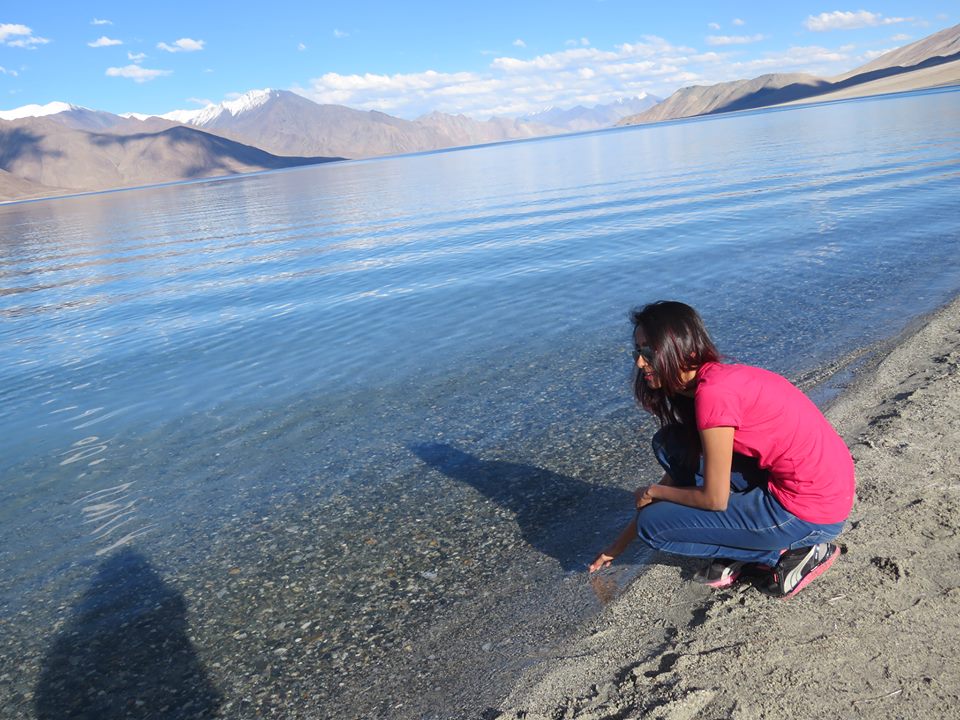 The camp in relatively secluded area surrounding the lake in close proximity to the banks. As soon as the sun set, the temperature dropped so drastically, that I felt that I had been transported to another place. After dinner I’d realized that the ‘I got Lehd’ t-shirt I was wearing was doing me no good, so I layered up with some thermals and jackets. Now that I was good to go, I headed to the campfire that was set up for some additional warmth. It was a particularly windy night with each breeze sending a shiver down my spine. Despite my eyes watering from the smoke blowing from the glowing red embers, I stuck around to keep my fingers warm and toasty. 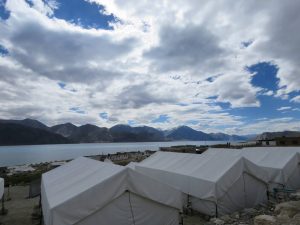 In such a beautiful place it didn’t take much to set the mood, my friend decided to put on some music and before we knew it we were dancing around the campfire under the moonlit starry sky. The DJs for the night were a few friends from Hyderabad who had taken it upon themselves to introduce us to some great Tollywood music. I always knew that music brings people together but I saw that expression come to light in an entirely different way. As the particularly funky beats of Super Machi played, our Ladakhi hosts and my other friends from diverse parts of the country danced without any inhibitions. As the night wore on, the music got softer until we finally decided to call it a day and retire to our tents. 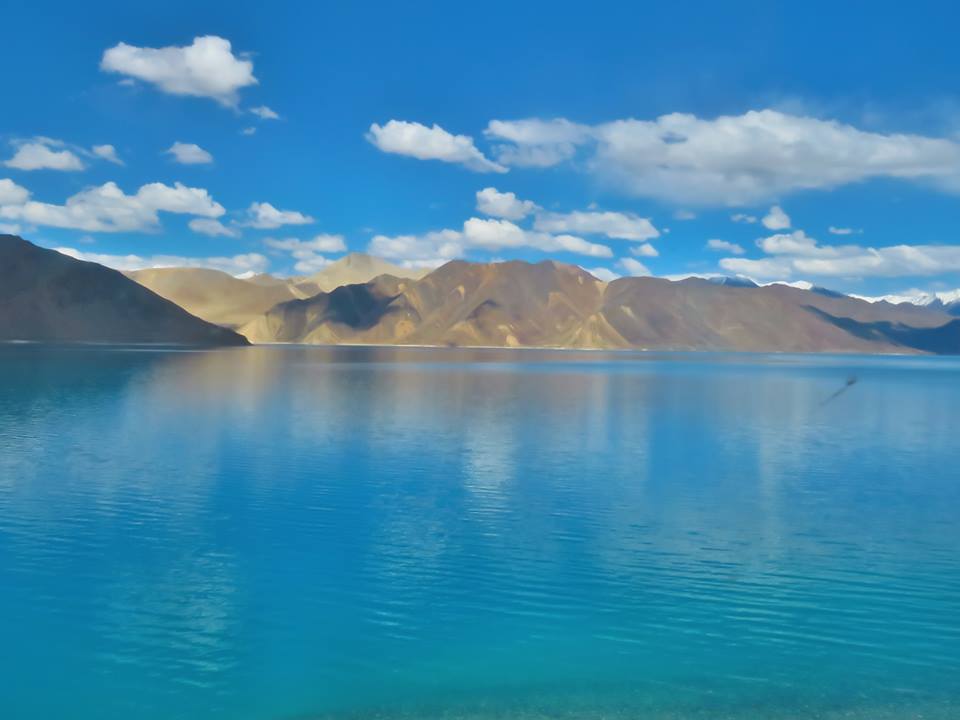 You know how there are some memories that you know will be frozen in your mind for a lifetime. For me, it was the morning when I stood outside my tent overlooking the Pangong and watched the sun rise over its crystal clear waters. Right outside the tent area were some stacks of stones balanced intricately also known as miniature stone stupas. Besides being a symbol of balance, the locals believed they brought great luck to travelers and fulfilled wishes. As the incandescent rays trickled over the glistening waters, I wished for the opportunity to be a witness to more such breathtaking sun rises. Even though my heart had not had its fill of this beautiful place, eventually it was time to leave. I stuck my head out of the window of the bus and lingered in the fresh mountain air as I watched the lake diminish in the background. With the resurfacing of the winding roads, the clouds made an arch resembling a gateway from heaven to signal a grand exit and the receding blue waters begged me to not leave. It has been more than two months now and I still don’t think I’ve ever left! 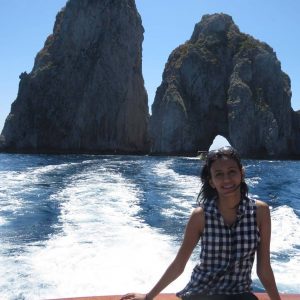 Meet Tanya…
Tanya wants to live by cliches like “cover the earth before the earth covers you”. If you ask her for a penny for her thoughts you’d probably run out of pennies before she runs out of thoughts. A master procrastinator and quintessential couch potato she also tries to keep up as a computer engineer. When not attempting to be funny, you can find her writing poetry, coloring her hair red, discovering new music or fighting an everyday battle against people who give GOT spoilers. ”
Follow her journey here!