Being the home of world’s most famous gems like Koh-i-Noor and Hope Diamond to name a few, Hyderabad is also a highlight for one of the medieval sultanate’s architectural wonder – the Golkonda Fort.
Originally named Mankal, this fort has been listed as an archaeological treasure by the Archaeological Survey of India. Along with being a marvel in itself, the citadel has witnessed some relevant segment of history.

Founded by a shepherd, a granite hill which once was a territory of the Kakatiya Dynasty, witnessed the construction of the Golconda fort. What started off as a kucha embankment was named Golconda where Golla meant Shepherd and Konda meant Hill.

It was built to use it as a part of their western defenses. The fort was strengthened by Rani Rudrama Devi and her successor Raja Pratap Rudra Dev. But soon enough, the fort was taken over by Musunuris, who again handed it over to the Bahmani dynasty. As the reign of the Bahmani dynasty was coming to an end, one of the five Governors, Quli Qutb-ul-Mulk, of the kingdom took over Golconda. He later found the Qutb Shahi dynasty under whose rule, the fort saw development and expansion.

But the power and prominence weren’t long-lived. During the rule of Abdullah Qutub Shah, the first invasion of Aurangzeb took place. A settlement was reached when Qutub Shah agreed to marry his daughter to Mohammed Sultan- son of Aurangzeb. But this treaty didn’t last long as Aurangzeb attacked Golconda for the second time in 1687 A.D. The fort, at that time, was ruled by Abdul Hasan Tana Shah, who, on the night of the invasion, was arrested and put behind the bars for next 14 years. 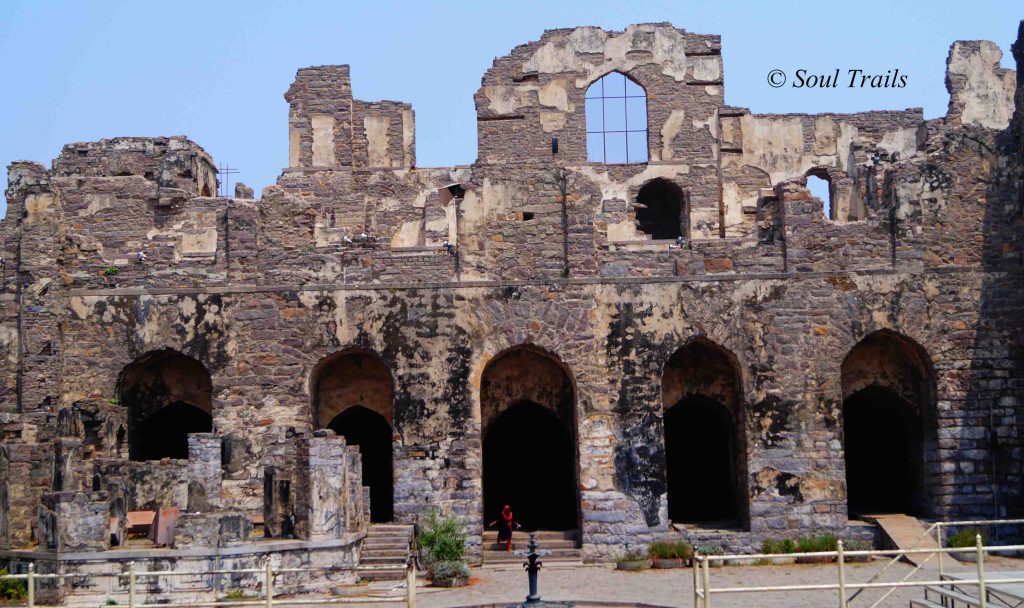 This marked the end of Qutb Shahi dynasty. The fort was last ruled by Nawab Meer Osman Ali Khan who, in 1947, was dethroned. This was followed by the formation of Andhra and present day Telangana.

The Treason at Fateh Darwaza

The riches of Golconda attracted the Mughal Sultanate towards it. The Mughal emperor Aurangzeb wanted to invade the diamond state of Golconda for its wealth and strategically advantageous geographical location to conquer rest of Hindustan. But even after an eight month-long siege, the Mughal army failed to impregnate the Golconda defence. Fortified walls, war efficient engineering, and spikes on the gate made Golconda impossible to defeat. It took a treason to make Golconda fall.

The eastern gate of the fort was opened by the traitor Abdullah Kha Panni for the Mughal army. The gate was later named ‘Fateh’ (Victory) Darwaza by Aurangzeb.

Aurangzeb got the full control of Kullar diamond mines and became the world’s richest monarch of his time after conquering Golconda.

The Diamond Trade of Golconda

Located between two major trade ports of India- Surat and Machilipatnam, the town of Golconda also developed as a trade center. A market particularly of diamonds was on boom near the Golconda fort. These diamonds were mined from some specific areas of Golconda sultanate and these mines were what made the kings of Qutb Shahi dynasty and the Nizams rich.

Under the Qutb Shahi dynasty, the city worked as the primary source of finest diamonds in the world. Along with producing large diamonds, the mines in Golconda were also famous for producing some of history’s popular diamonds.

One of these precious diamonds was the Koh-i-Noor. This also has its fair share of history. The diamond was mined at the Kollur mine and was later presented to Shah Jahan. After Nadir Shah attacked Delhi during the invasion of Mughal Empire, he took Koh-i-Noor with him to Persia. It later made its way to India through Punjab where it was gifted to Maharaja Ranjit Singh. The diamond ultimately reached where it is now (in the British Crown Jewels), when Dilip Singh, son of Maharaja Ranjit Singh, gifted it to Queen Victoria.

Built at about 400 feet above the surrounding region, the giant structure is 10 kilometers in circumference and consists of 4 district forts. The outer wall has 87 semi-circular bastions which rise between 50-60 feet. To add on to the gigantism, the fort has 8 gates that gave the elephants of Aurangzeb’s army a tough competition for eight months straight. Within the walls, there’s a parade ground, a palace, mosques, and temples out of other establishments. But these aren’t the only things that make this, now ruin, a masterpiece of human hands.

After establishing the truth that the structure is indeed a giant, it becomes necessary to emphasize the facts. Each twist and turn is an experience in itself.

The Minarets of Golconda:

Out of the 87 bastions, three hold some significance in the history of the fort. Petla Burj, the minaret at North-West of the fort, is the home of a massive 16 feet long cannon named Fath Raihbir, which once marked the victory of Alamgir. The cannon glorifies the enormousness of the fort. This is followed by the bastion at the South- the Mosa Burj. Standing on its ground is an exact replica of the mighty Fath Raihbir, named Azdaha Paikar. The last bastion with the Alamgir Majnu cannon is the Majnu Burj.

The Storage at Golconda:

An infrastructure that huge required a complimenting storage. To one’s amusement, the fort does have some massive Kucha. A cistern named Katora Houz was used to store a large amount of water, so much so that the kings would enjoy boating in the same. The palace also had an ingenious water supply working with the help of the force of gravity, to ensure a continuous supply of water to all the parts of the fort. There’s also a special rainwater harvesting system which also supplied water for the purpose of irrigation and other chores. Another one of the storages is the oil storage house which is carved out of a single stone. This, at its time, could store up to 12,000 gallons of oil at once.

The halls and gates, the nooks and corner, each crevice has a story to recite. Not only was it the vault for some precious diamonds, but also a casket of stories which are well described by carvings. The eastern side of the citadel is the location of Balahisar Gate- the main entrance of the fort. It’s guarded by the statues of mythical beasts. It is designed with a pointed arch that has some peacock carvings, and scrollwork carved on them. Though its last residents were from the Mughal dynasty, some carvings still resonate the Hindu architecture, pointing at its Hindu origins.

Balahisar is a structure that saw many ‘Khas‘ and ‘Aam‘ visitors. But most importantly, this piece of architecture was famous for the acoustic effect. The Balahisar gate was engineered in a fashion that a clap under the arch at the gate could be heard at the topmost point of the extravagant pavilion. This system was used as a method to both convey messages and eavesdrop on a conversation. To the opposite of the main gate is the Curtain Wall that enveloped the Balahisar gate such that no enemy could get enough space to break it. If one observes carefully, they will notice holes in the arch of the gate. These were used to pour molten metal or hot oil on enemies. The gate was studded with iron spikes that managed to keep elephants off the fort and this made Balahisar gate the epitome of defence.

The first show is in the English language. The second show is in Telugu (on Monday, Wednesday & Friday) and in Hindi (Tuesday, Thursday, Saturday & Sunday).

Pro-tip: Visiting the fort is a lot of walk. Please make sure to wear comfortable walking shoes and carry a water bottle with you.

Though to my surprise, this beautiful and massive infrastructure is not on the UNESCO World Heritage list. The fort and monuments like Charminar and the Qutb Shahi tombs were submitted to UNESCO, in 2010 by the Permanent Delegation of India, for consideration as the World Heritage Site. But irrespective of this, even though the fortress may not have the same aura as it once did, it sure does whisper the lavishness its last residents lived with. It is only after visiting a historic site like this, that one realises their value in history.